People everywhere are falling in love with Softubs! From the easy installation, to the portability, comfort and affordability – the reasons are endless. But don’t just take our word for it. Listen to our customers tell you why, in their own words.

Chris and MaryAnn have been Softub owners for five years, and use their Softub all the time! They set their hot tub outdoors on their deck. They both recommend Softub to their friends, and MaryAnn says “It’s easy to clean, it’s easy to keep, the upkeep is minimal and the electric use is phenomenal!”

Lehman and Ellie have owner their Softub for one year, after replacing a traditional hard tub hot tub. Lehman says that, between the two, “There’s just no comparison.” The Softub is easier to operate and easier to upkeep, and was easy to install on their deck with the fantastic view. Another way the Softub beats their old hard tub model? “You can take it down and move it anywhere in no time at all.”

As a black belt in tae kwon do, Beth knows all about sore, aching muscles. And she loves the relief she gets from her Softub. “I feel relaxed immediately,” she says. She also has two sons who play football, and they love to use the Softub after their games, especially those in cold rain and snow. “They can’t wait to come home and soak in it for as long as I’ll let them.

Tom and Peggy keep their Softub “the best single investment they’ve ever made” at their camp, where Peggy says they simply roll it out on Thursday and roll it back in on Sunday. Tom appreciates that the Softub is easy to move and can be set up just about anywhere. In fact, Peggy says, the set up is so easy “even HE can do it!”

Brian has owned his Softub for three and a half years, and most of all he appreciates how easy it is to maneuver. He sets his Softub up indoors in the winter, and then moves it to his deck during the summer. “When it’s empty, it’s so light I can roll it right out by myself and set it up by myself,” he says. Plus, his Softub doesn’t take long to fill or heat up once he’s relocated it – another plus! 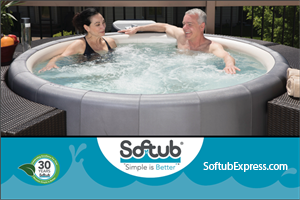